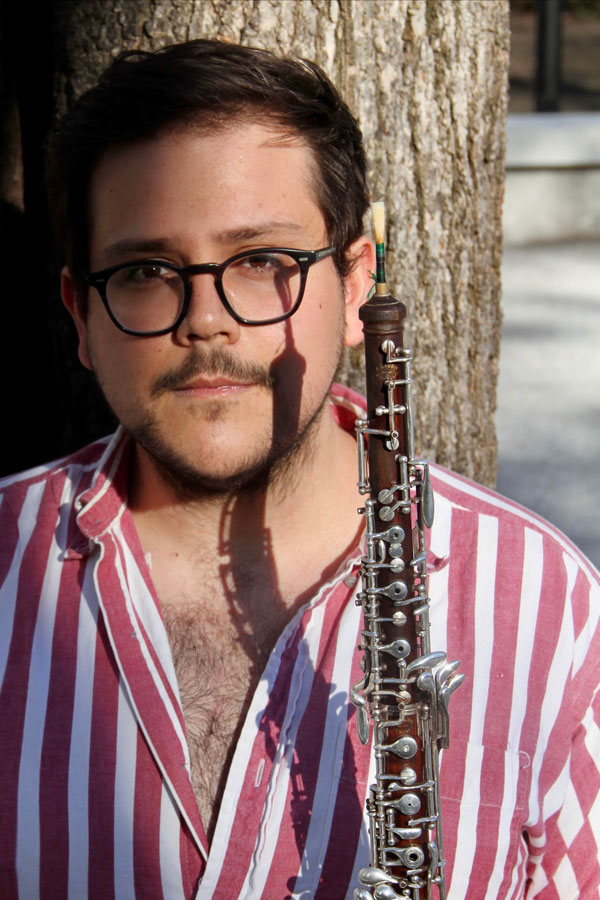 Antonio Urrutia-Mendoza, Oboe and English Horn, is a Colombian born, Miami and Montreal based classical musician. The South Florida Classical Review has described his playing as “expressive and suspended,… layering a thunderous effect”. An avid free-lancer, Urrutia frequently performs with groups such as The Florida Grand Opera, Palm Beach Symphony, The South Florida Symphony, and was recently a finalist and substitute musician with The New World Symphony.

Antonio has just received his Masters of Music in Orchestral Oboe at the McGill University Schulich School of Music, studying with Theodore Baskin. He also completed his Bachelors of Music in Instrumental Performance from the University of Miami Frost School of Music where he is a Stamps Distinguished Ensemble Scholar and a member of the Stamps Woodwind Quintet, Class of 2019; The premiere fellowship quintet of the Frost School of Music. He studied privately with Robert Weiner. Mr. Urrutia is currently Principal oboe of the McGill Symphony Orchestra, under the direction of Alexis Hauser. Recent performances include the solo part in Ravels’ oboe tour de force “Le Tombeau de Couperin”, the Berlioz “Romeo et Juliette”, and Beethovens’ Symphony No.6 “Pastoral”. Recently, Urrutia has also led the oboe section in the McGill Opera Theatre, particularly a recent digital edition of Benjamin Britten’s “The Turn of the Screw”. During his time at Frost, Urrutia performed in the Frost Symphony Orchestra, as well as performing and recording with the internationally recognized and award-winning jazz-fusion ensemble; the Henry Mancini Institute Orchestra. He performed chamber music and toured with the Stamps Woodwind Quintet, as well as serving as principal oboe of the New Music group Ensemble Ibis.

Antonio is so excited to spend the summer as part of the National Academy Orchestra of Canada! Most recently, he participated in the Brevard Music Festival, where he performed as Principal oboe and solo English Horn with world renowned conductors such as Joann Falleta, Sebastian Lang-Lessing, and Keith Lockhart. Antonio has also appeared in the Sewanee Summer Music Festival, and has performed at the Imani Winds Chamber Music Festival with the Stamps Woodwind Quintet. Urrutia’s extended private study includes Robert Stephenson, principal of the Utah Symphony, Emily Brebach, solo English Horn of the Atlanta Symphony, and Eric Ohlsson of Florida State University. He has also participated in a plethora of Masterclasses, which include Eugene Izotov, Humbert Lucarelli, Mary Lynch, Nancy Ambrose King, and many more.

Antonio Urrutia hails from Bogota Colombia and began playing Oboe in 2008. In his free time, he enjoys playing tennis, hiking, skiing, scuba diving, basically anything outdoors! On top of that he was a deep passion for visual art, and you can find him seeing the newest exhibition at a local art museum, or exploring galleries in all different parts of the city.