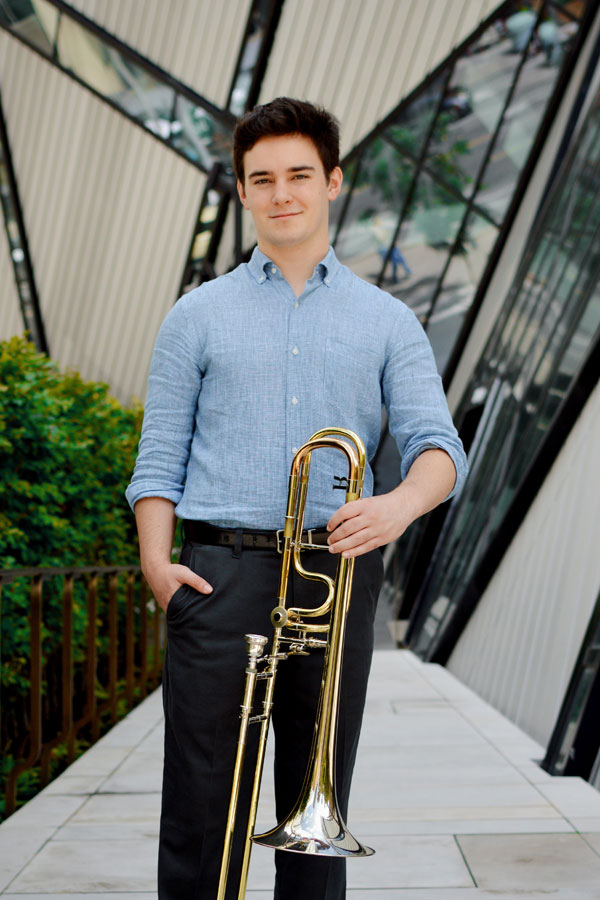 Hailing from Port Hope, Ontario, Ben Storm is a Toronto-based Trombonist currently working towards a Bachelor of Music in Trombone Performance at the University of Toronto. He has been a member of the University of Toronto (UofT) Symphony Orchestra, Ontario Pops Orchestra, Northumberland Orchestra, and the Toronto Symphony Youth Orchestra. An enthusiast and performer of varying styles of music, Ben has also performed with the UofT Contemporary Music Ensemble, Hannaford Youth Band, Port Hope Pops Orchestra, and the JazzFM Youth Big Band. He is a member of the Band of the Queen’s Own Rifles of Canada in Toronto, and is also a former first trombonist with the Band of the Ceremonial Guard in Ottawa.

Ben has been awarded the B flat Band Festival Bursary, Cobourg Distinguished Civic Award for the Arts, Frank Harmantas Trombone Scholarship, and has been recognized as a President’s Scholar of Excellence in the University of Toronto’s Faculty of Music. He has studied with Canadian trombonists Megan Hodge and Kevin Cook, and is currently a student of Vanessa Fralick.

Beginning his trombone studies in jazz, Ben continues to play and listen to jazz in his free time and is deeply musically influenced by big band trombonist Tommy Dorsey. Outside of music, he can be found indulging in Toronto’s many farmer’s markets and shawarma restaurants, or pursuing his interests in art history, movies, and anything by Tolkien.