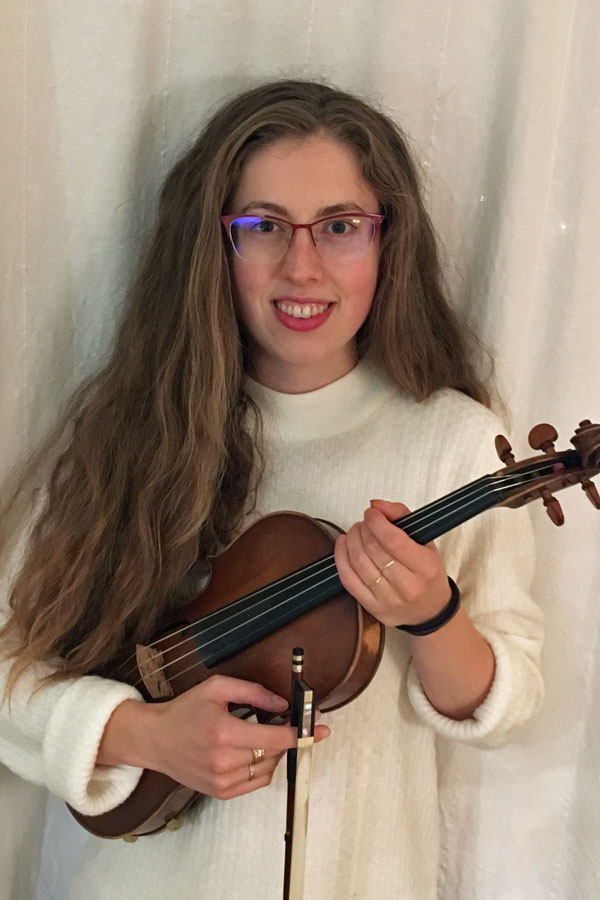 Violinist Raina Saunders began taking fiddle lessons at the age of 8 in her hometown, Victoria, BC. At 13 years old, she started pursuing classical violin. She went on to complete her BMus in Violin Performance at the University of Victoria and her MMus and Graduate Diploma in Violin Performance at the University of Ottawa, studying under Sharon Stanis and Yehonatan Berick. Raina has performed for distinguished teachers from around the world, including Benjamin Schmid, William van der Sloot, Andrew Dawes, Paul Katz, the Danish String Quartet, and the St. Laurence String Quartet. She has attended academies such as the Orford Academy in Quebec, the Tafelmusik Baroque Summer Institute in Toronto, the Summa Cum Laude Competition in Vienna, and the chamber music program at Scotia Festival of Music in Halifax. As a winner of the Johann Strauss Foundation Scholarship Competition, she also attended the Allegro Vivo Summer Academy in Austria. In addition to performing chamber music on the NAC’s Fourth Stage and playing in the Ottawa Symphony Orchestra, Raina has recorded on rock, folk, and sacred albums, toured with a rock/folk band, and enjoys playing fiddle and improvised music.

Raina is also fascinated by the intersection of music and health. She recently helped to launch the Musicians’ Wellness Centre at uOttawa while completing a one-year MA in Music Pedagogy, conducting research about deaf musicians with cochlear implants. Since finishing her MA in 2020, she has been working as a freelance musician and lead Teaching Artist with OrKidstra in Ottawa.